This will be a short one tonight.

I wanted to announce that I have two winners for the copies of Warrior's Duty.

They will go to John and Victoria and I'll email them both tomorrow to get their physical addresses. Thanks so much to everyone who took part!

I've talked to a number of people recently who are looking for agents and I want to mention what I consider the best source for help and information for an agent search. I highly recommend QueryTracker.net.

It has the most complete database of American Agents that I've seen, and I've looked at a most of them. Pat who runs it is meticulous about removing questionable agents. Each agent page also has links to sources where you can check further, such as the agent's webpage, Publisher's Marketplace, AgentQuery and Predators & Editors. You can also use it to track your queries and query results and look at accumulated stats on queries and submissions from other authors.

Nope, they don't pay me. I just think it's a great resource. So if you're looking for an agent I suggest you head over to http://www.querytracker.net .

I'll have more thoughts on the writing life soon so keep writing.

Email ThisBlogThis!Share to TwitterShare to FacebookShare to Pinterest
Labels: agent, contest, give away, paperback, querytracker

I normally stay out of politics, but I'm upset enough by things I'm seeing said that this one time I'm giving my strong opinion. Just this once.

Many people seem to be unaware that Lockerbie is in Scotland and that large numbers of Scots were killed in the Lockerbie bombing. A large part of a Scottish town (Lockerbie) was destroyed in that incident.

However, there seems to be nothing surprising in a Americas being unaware of the concept that another country has their own laws and should follow them. Certainly, the concept of Compassion is unknown in American "justice."

Well, it is part of the legal system of Scotland. They followed their laws, not ours--as they should have. If there were someone to boycott to get this point across, I assure you I would.

I just returned from Scotland. Next year, I will go to Scotland again. And I have sent congratulations to my Scottish friends.

And apologies for the bullying attitude of many Americans, most especially the ridiculous and offensive letter from the head of the FBI indicating that Scots should have followed American law instead of Scottish law and that somehow Scottish law did not matter. SHAME on you, Mr. Mueller. Shame! Shame for telling Scotland they shouldn't have followed their own laws. Shame for trying to bully another country.

And this from a country that waterboards and threatens prisoners with power drills. Oh, we have a LOT to brag about. We execute the mentally ill (Texas is part of this country, right?) and want other countries to follow our example. I think we'd be better off following Scotland's example rather than screaming at them.

America has long acted like a bully in international affairs and this just shows, in my opinion, that a change in administration hasn't changed that--to my sorrow and continued shame.

I assure you that not all Americans are so stupid they are unaware there were Scottish victims of this bombing, that there is doubt the man was even guilty, and that Scotland had the right to make the decision.

Good job standing up to bullies, Mr. MacAskill and Mr. Salmond!
Posted by J. R. Tomlin at 8:49 AM 6 comments: 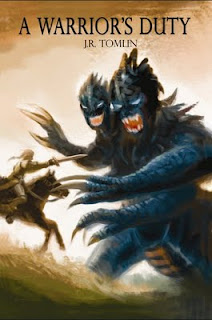 I have TWO paperback copies of Warrior's Duty that I will give away on August 28.

So just post a comment including your email address (which I'll remove so it doesn't appear). On August 28, I'll pick two random posters to receive the free copies. I'll need to email you to request your mailing address.

Here is the link if you'd like to read the first chapter.

Sales are looking pretty satisfactory so far although not earthshaking. It has been a great experience.

As you may have noticed, I moderate the comments. I simply save the ones with email addresses without letting them appear. So don't worry that I didn't get your comment if you don't see it. I just don't want spammers picking up your email addy but I obviously have to have them to notify whoever I give the novels to. I don't really see a better way of doing it.

My First Book Review and this happens to be from my own publisher but it was neither solicited nor did they promise me extra royalties. :-)

The Revelations of Minister Skyddz by E. J. Vance from Swimming Kangaroo Books

This is a satiric version of The Bible with twists on the original that will amuse some and infuriate others. If you are a conservative Christian, I suggest staying away. If you have a sense of humor and an open mind on the subject of religion, this may be just the book for you. The creator, also known as Lordy Dude, after doing his creation bit begins meeting Archangels, who become God's motorcycle club with much partying and pulling of pranks. I loved the fiendish parody of Adam and Eve, and the re-telling of the story of Satan will give you a jolt (maybe even make you think after you finish chuckling).

The writing isn't perfect. The first part was a bit slow. But it's worth your time to keep going. A little way in, it gets good.

AND I'll be starting another book give away (this time of paperbacks) later this week!
Posted by J. R. Tomlin at 3:23 PM 3 comments: