Free this Weekend: Freedom's Sword, A Historical Novel of Scotland

This weekend only Freedom's Sword with 19 straight rave reviews is free on Amazon in the US and the UK.

Before William Wallace, before Robert the Bruce, there was another Scottish hero...

In 1296, newly knighted by the King of the Scots, Andrew de Moray fights to defend his country against the forces of the ruthless invader, King Edward Longshanks of England. After a bloody defeat in battle, he is dragged in chains to an English dungeon.

Soon the young knight escapes. He returns to find Scotland under the heel of a conqueror and his betrothed sheltering in the hills of the Black Isle. Seizing his own castle from the English, he raises the banner of Scottish freedom. Now he must lead the north of Scotland to rebellion in hope of defeating the English army sent to crush them.
Posted by J. R. Tomlin at 8:35 AM No comments:

*CENSORED* Thanks to SOPA 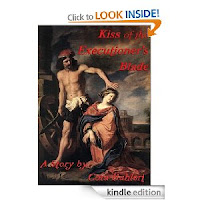 Today I'm talking to Cora Buhlert, author of numerous pieces of historical fiction. I'm thrilled to have her visit.

And here is a link to her Cora's US Amazon Page showing all her fiction and those of you in the UK will find her here. Please do check it out.
Posted by J. R. Tomlin at 1:26 PM 2 comments: