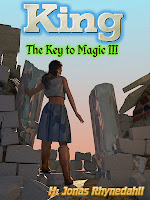 I'd like to welcome H. Jonas Rhynedahl, author of the excellent The Key to Magic series. Jonas, thanks for answering some questions about your novels and your writing.
First, when did you start writing? What did you first write?
Like many I suppose, I started writing fiction when I was young. I'd been reading F&SF -- Edgar Rice Burroughs, Andre (Alice Mary) Norton, Heinlein, Laumer -- since I was about seven years old (back then, I had to get one of my older brothers to snag books from the grown-up section, since helpful librarian ladies tended to want to steer me towards the juvenile section). I caught the writing bug at twelve, learned to type on an old Underwood, and started banging out unfinished novels and short stories. I've always written only F&SF and my first finished novel was Orphan, the first in my epic fantasy series, The Key to Magic.
I would consider ERB and Alice Mary Norton to be the greatest influence on my conception of fantasy, and I would consider their prose and stories as the epitome of "traditional fantasy."
Tell us about the fantasy world(s) you make up. What are they like?
Though I do not shun either of the two, I don't really strive for the bizarre or unusual in my fantasy settings, finding little worth in simply being different for the sake of being different  My fantasy worlds are often comfortably familiar, but not (hopefully!) too recognizable. I've studied and read a lot of history over the years and tend to rat hole some of the more off kilter facts and situations. These make excellent seeds for the creation of a world.
I like adventure when I read fantasy and attempt to inject as much of it as possible in my own writing.
The world of The Key to Magic is a combination of several historical eras with the addition of some literary and anthropological details.
The world of my humorous fantasy, Potatoes, Come Forth! (which may one day have a sequel) is a bit less traditional, with a system of magic existing in a world with steam power, firearms, and embodied natural forces.
How do you work out a magic system for your world? Do you prefer a lot of magic? Light magic? And why?
I believe a robust system of magic ("A sufficiently advanced system of magic is indistinguishable from science.") is the fundamental ingredient of any traditional fantasy universe, Tolkien-esque or otherwise, I usually spend a lot of time sorting out how magic works in my world and make copious notes in an attempt to remain consistent.
I like magic that has rules, limitations, and drawbacks, but I also expect my magic wielders to do fantastic and wonderful things. A hero or heroine must, after all, save the world, or, at least, his or her small part of it.
What is the hardest thing about making up a fantasy world? Why?
For me, creating a cohesive back story. I find that I have to know -- even if the specific facts never make it onto the page -- why things are the way they are and how they came to be. If I write something like, "The great fortress before Korae's horde had never before fallen in war, but he knew that it would today,"  I have to create the three hundred years of history that detail those previous failed sieges and some of the characters involved.
For The Key to Magic, I have forty pages of abbreviated historical and geographical notes and a growing timeline.
Tell us about your most recent main character. Would we want to share a meal with them? Why?
Mar, the main male character of TKtM, is altruistic, heroic, and determined.  He is also customarily disagreeable, frequently anti-social, and relationship impaired. He started out as your basic good guy and while I have been tempted to skew his personality with the insertion of tragic events, I think that would be simply disingenuous.   Mar isn't perfect, but he is a hero.
What about the villain of your most recent novel. How did you make them up? Would we be scared to meet them in a dark alley?
One luxury of epic fantasy is the freedom to have a plethora of bad guys.  In TKtM, there are a number of competing villains and I kill them off as the situation permits.  Most of my villains are adaptations or amalgams of historical figures.  Very few purely fictional antagonists can match the unmitigated evil of real people.
I think it unlikely that you would meet one of my villains in a dark alley.  They tend not to operate solo and it would be more usual to encounter them as they burned your village and slaughtered the people as they came out.
What is your next project?
I am currently working on the next novel in the TKtM series, Emperor, with  two SF novels, Tunnels and Time Traveler's Currency Exchange and Pawn, simmering.  I have a wisp of an idea for a humorous novel based in a fantasy world that I created in my short story "Virtue", but it hasn't reached the planning stage yet.
My books are available at Amazon, Barnes and Noble, and the iBookstore.
Jonas, thank you so much and best of luck with your novels.
Posted by J. R. Tomlin at 9:49 PM No comments: