The Department of Justice, Publishing and Amazon Eating the World

The results of the ongoing DoJ suit against major publishers and Apple is going to filter through the publishing industry and affect us all, whether readers or authors.

A brief recap for those who haven't followed the case: The Department of Justice has accused 5 of the Big 6 Publishers, Hachette SA, HarperCollins, Macmillan, Penguin and Simon & Schuster, along with Apple of colluding to fix eBook prices. The collusion appears to have been fairly open. The publishers and at times Apple executives even met to discuss the price fixing in fancy New York restaurants. The collusion went right up to the top and appears to have started at the suggestion of Steve Jobs. Amazon was reducing eBook prices and Apple wanted to see eBook prices kept high (the opposite of their position on music).

Mind you, I think in a back hand way we indies  benefited by publisher prices being artificially kept high by making our lower priced novels attractive to buyers in comparison, but I also believe it was bad for the industry as a whole.

The price fixing keeps the market share of ebooks from growing at the rate it would normally, so in the end we all end up hurt, including those of us who end up paying more than we should for eBooks as well as those of us who sell them and want to see the market expand.

Simon & Schuster, Hachette and HarperCollins have settled with the DoJ and agreed to penalties which include government oversight and restrictions on agreements that would allow them to benefit from past misbehavior. Not long ago the DOJ asked for industry comments regarding its proposed settlement with those companies.

Needless to say, the companies which had benefited from the collusion such as Apple, B&N and the Authors Guild, led by Scott Turow, whose members are all signed with big publishers responded saying in effect that since they benefited from the price fixing it should be allowed. However, the position of most indie authors was the very opposite.

It was the intent of organizations such as Authors Guild that support for the DOJ position would be overwhelmed by their attempt at a coordinated letter-writing campaign. This attempt failed.

Authors such as Joe Konrath, Laura Resnick and David Gaughran (whose letter was signed by 184 additional indie authors) wrote letters favoring the settlement. Special thanks go to author David Gaughran who helped so much to ensure that the voices of independent authors were heard.
Today the DoJ published its lengthy filing regarding the public comments: Response of Plaintiff United States to Public Comments on the Proposed Final Judgment

Much of that is worth reading but at 70 pages it's not easy going. I felt the most salient part was this:

"protecting profits attributable to collusion is squarely at odds with a fundamental purpose of the antitrust laws: the promotion of competition. And, many of the so-called“ procompetitive benefits” that these commenters believe will be lost if the decree is entered are illusory or cannot be attributed to the collusion.While the Tunney Act directs the court to consider the impact of the settlement on third parties, these third parties are limited to those “alleging specific injury from the violations set forth in the complaint.”

In this case, the third parties that the Court is directed to consider under the Tunney Act are the consumers of e-books, not the brick-and-mortar booksellers, which admit that they benefited from the conspiracy. The booksellers’ objection is not that they were harmed as a result of the violation, but that the proposed Final Judgment ends the collusively-attained equilibrium that provided them with an anticompetitive windfall."
(Pages 18 and 19 of Response of Plaintiff United States to Public Comments)

For me, the comment by author Laura Resnick quoted in the DOJ Response expressed it very well: “breaking the law is not a reasonable reaction to being faced with aggressive business competition.”

The DOJ response has provoked much foaming at the mouth (especially at Publishers Weekly and commenters there) from traditional publishers and those with related interests who continue who insist that if there isn't price fixing that Amazon will eat the world. Or at least the eBook reading portion of it.

There is an internet meme that Amazon is mysteriously a "monopoly" although it fits none of the requirements for being a monopoly such as complete control of a product source. Amazon does not control the supply of eBooks and has no way of doing so.  And even if it were a monopoly (which it isn't), that wouldn't make price fixing on the part of Apple and the publishers involved legal. It would only mean that there should possibly be separate action against Amazon.

In fact, however, the DOJ dismissed the monopoly charge with the comment: “No objector to the proposed Final Judgment has supplied evidence that, in the dynamic and evolving e-book industry, Amazon threatens to drive out competition and obtain the monopoly pricing power which is the ultimate concern of predatory pricing law.”

I have absolutely no doubt that we are very near the end of the eBook price-fixing scheme as we have seen it for the past several years. This means we are near the end of unconscionably high prices for eBooks from major publishers. While this may increase the downward price pressure on my own novels, I am convinced that in the end it will increase the eBook market, possibly very rapidly, and thus benefit all authors.

Most importantly, it will make eBooks more accessible and more affordable for readers.

This weekend only my highly-rated fantasy novel Blood Duty is reduced from its regular price of $3.99 to only 99 Cents.

UPDATE: This promotion went so well, I have decided to leave Blood Duty priced at 99 Cents for the time being. 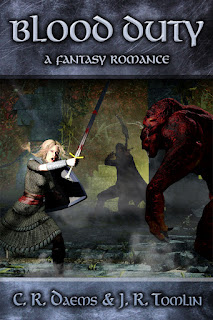 A recent Amazon reviewer said: "I almost bypassed because it was marked as a 'fantasy romance' and many I've tried were too heavy on the romance, too light on the fantasy and storyline. I'm delighted to say I would have missed a very entertaining book if I had not tried it. Very little 'romance' but rather a solid, established relationship between two admirable main characters. Solid fantasy of the swords and sorcery variety with well developed characters and an interesting twist on 'this is how we defeat the bad guys and win the war'."

I'm pleased to tell you that A Kingdom's Cost is one of the finalists for the 2012 eFestival of Words Best of the Independent eBook Awards in the Historical Fiction Category!

You can find a complete list of the finalists here: http://www.efestivalofwords.com/master-list-of-finalists-t146.html

This a peer nominated award that I am very pleased to be nominated for! Voting is open so I hope you'll decide to put in a vote.
Posted by J. R. Tomlin at 5:39 PM 1 comment:

Freedom's Sword is now only 99 Cents. Normally priced at $2.99, the sale price is for three days only, Saturday, Sunday, and Monday. 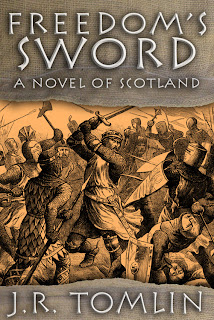 Before William Wallace, before Robert the Bruce, there was another Scottish hero...

In 1296, newly knighted by the King of the Scots, Andrew de Moray fights to defend his country against the forces of the ruthless invader, King Edward Longshanks of England. After a bloody defeat in battle, he is dragged in chains to an English dungeon.

Soon the young knight escapes. He returns to find Scotland under the heel of a conqueror and his betrothed sheltering in the hills of the Black Isle. Seizing his own castle from the English, he raises the banner of Scottish freedom. Now he must lead the north of Scotland to rebellion in hope of defeating the English army sent to crush them.

Freedom's Sword is the first of my series of novels about Scotland's war for independence, followed by A Kingdom's Cost and Countenance of War.

The sale price in the UK is £0.77, and it is available on Amazon UK here: http://www.amazon.co.uk/Freedoms-Sword-Historical-Scotland-ebook/dp/B004RUZPPY
Posted by J. R. Tomlin at 5:29 PM No comments: