NEW in the Kazak Guardian Series: The Unthinkable by C. R. Daems 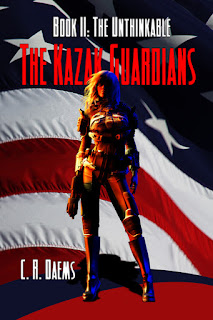 Lynn the Fox has been a Kazak for several years and thought she had seen it all; after all, she's a Master Kazak having killed more than five Assassins—professional killers with wizard-like talents. But life is unpredictable and the unimaginable is about to happen.

From Double Dragon Press. Only $4.99 on Amazon!

Review: The Generosity of Strangers by Thomas E. Antonaccio 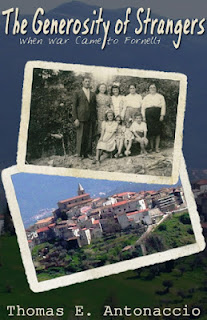 Description from Amazon: When War Came to Fornelli is written in first person, free verse, and consists of a series of vignettes chronicling the real life experiences of a young girl and her family in war-torn Italy in the 1940s. The story is set in the town of Fornelli–a tiny hilltop community in Italy’s mountainous heart.
For Lucia and her family, life in Fornelli is anything but boring. Life is difficult, yet tranquil. But soon the war comes, and life in Fornelli is tranquil no more.

In many ways this is a simple book. It is about Lucia, a small girl in a village in Italy, her Mamma and Tata, her brothers and sisters, and the animals around the farm.

However, in many ways it is a darker book than many children's books, because it also looks at World War II through the eyes of a child. Her father leaves and there is loss and sadness. There is also family and beauty.

As is appropriate in a child's book, the language is relatively simple and although it shows the sadness that does happen in life, it is child friendly. It is written in verse in short chapters which is unusual, but works quite well. The Generosity of Strangers is I think a good way to introduce children to the past and to the fact that there can be loss as well as happiness and that having the first does not mean never again having the second.

This is a book that I will be giving to one of the children in my own family.

The Generosity of Strangers on Amazon.
Posted by J. R. Tomlin at 10:45 PM No comments:

Coming Soon: Not for Glory, a Historical Novel of Scotland

The final novel in The Black Douglas Trilogy and still in edit but here is the opening:

June 24, 1314
The English were trapped against the Bannockburn. The hedge of Scottish steel shoved once more against the desperate knights, and Sir James de Douglas saw the banners flying above the writhing mass. Those banners included the huge scarlet banner with the Plantagenet leopards; that banner proclaimed that King Edward of Caernarfon was somewhere close in the chaos.  James bellowed his battle cry, “A Douglas! A Douglas!” battle fury sweeping through him. Rage and hatred unleashed for the losses and the pain. He smashed his sword into an English face. For Isabella. For his father. For Thomas. For Alycie. He swung again and again.
Around him his men screamed, “Scotland! Scotland! On them!” Hungry for revenge, they had spent their lives fighting the invader, and they had become savagely good at war. An arrow sliced in from the right, striking James’s shield. He lifted it, but no more came. Archers would have been the last chance for the English, but King Robert de Bruce had planned well for them, and held back his five hundred Scottish chivalry to sweep behind the English line and attack the archers.
James’s men shouted as they thrust their pikes into the belly and face of English horses, into the gaps in gleaming armor; they chopped with their weapons. And the English fell back, horses screaming as they went down the steep edge of a gully.
The English had nowhere more to go. Under the English hooves, men lay, dead, wounded, shrieking in pain. Their commanders were shouting to retire. And the Scots slashed into them. English knights shouted curses, thrust with lances, swung swords as they were forced back. Ribbons of scarlet waved through the Bannockburn’s waters. The English knights fought with the desperation of trapped men.
Next to James, one of his men grunted as he hacked his pike into the writhing mass of English. Another horse went down. Blood and mud splattered onto James’s helm. The rider threw himself free, landing flat on his back. James grunted as he slammed a foot on the knight’s chest and thrust his sword down through his throat.
“On them!” The bellows from his men were deafening. "They fail!"
"Sir James!"
James spun at the hand on his shoulder, jerking his sword arm into position.
A pale-faced lad dodged backward. "The king sent me. He wants you."
An unhorsed Englishman screamed as his head was crushed by a slashing hoof. He fell atop a knight already dead. James's own men wore helms and studded leather, marked with the blue and white Saltire of Scotland, now streaked with mud and blood and gore. The steel tide surged against the crumbling mass of a panicked foe. They heaved forward a step.
Six hours they’d fought, since the cool of dawn, hacking at an army that seemed without number. His arm suddenly was heavy with the fatigue of a day of slash and thrust.
The English trumpets shrilled thin. Harooo Harooo… Retire… Retire…
He blinked the sting of sweat from his eyes. Where was Walter Stewart? In the chaos, James spotted Walter’s blue and white checky pennant. He grabbed Iain’s arm and pulled him out of the line of pikesmen. "Find Sir Walter. Tell him he has command." He shoved his sword into his black leather sheath and jerked a nod to the squire. "Lead on."
The lad turned and clamored across the broken sod, past a sprawled body of a knight, his armor still agleam as his blood soaked into the dry earth. For a moment a breath of a breeze cut through the fug of blood and shit. Who could have imagined such a battle? A body wearing a studded brigandine marked with a Saltire was pierced by the shattered remains of a pike next to a stallion, its guts spilled onto the ground. They trudged past it all and the uproar faded behind them into a rumble.
Beyond a ragged stand of alder, leaves drooping in summer’s heat, the king’s golden lion banner hung limp in the still air. The lad pointed. James slapped his shoulder and strode through the welcome shade of the trees as he reached up to wrench off his helm.
Posted by J. R. Tomlin at 6:55 PM 2 comments:

I have recently seen some absurd arguments on this topic. While I tend to try to stay away from politics on this blog, I find it necessary to comment.

There is something very interesting about that list. Of those 28 nations in NATO, only three have nuclear weapons: France, the US and the UK. That means they at least more or less have their own weapons (although whether the UK could use theirs without input from the US is open to question). However, there are this time five nations of NATO that allow nuclear weapons -- mostly operated and guarded by US forces -- upon their soil in what is called "nuclear sharing": Belguim, Germany, Italy, the Netherlands, and Turkey.

That's it. Twenty-eight nations in NATO, and only eight have nuclear weapons on their soil. Twenty do not.

Every nation that has been admitted in the past few years, and there has been a number of them, (Estonia, Latvia, Lithuania, Slovenia, Bulgaria, Hungary, the Czech Republic and Poland) has been admitted WITHOUT imposing nuclear weapons upon them on their own soil. But supposedly, according to some, Scotland would be expelled -- as it is now in effect a member as a part of the UK -- if it does not meekly agree to nuclear weapons in its waters.

Frankly, the argument is risible.

I am not getting into the argument about whether Scotland should be an independent or not. That is not my business. In the autumn of 2014, the people of Scotland will rightfully decide that matter in a referendum. But they must be given facts upon which to decide. It would be a travesty for the decision to be based upon lies perpetrated by pro-Union politicians and those who are simply in opposition to NATO.

Edited to add: Congratulations to my many friends in Scotland today on the signing of the agreement between the Scottish Government and the UK Government on a referendum for Scottish independence. Alba gu bràth!

Three of the most life-impacting (and life-affirming) words you can say in our society are these:

At time, sadly, they may seem very isolating. LGBTQ in books in literature are one step in breaking that isolation, in realizing that we are merely one variable in the myriad variety that makes up being human. Here is a list of a few novels which include LGBTQ characters and themes and for National Coming Out Day they are 50% off at Smashwords.

Although not taking part in a promotion, another author whose work you might want to visit is Josh Lanyon.

My fantasy novel Blood Duty has two secondary characters who are gay.

Another good novel with a main character who is gay and female is C. R. Daem's The Kazak Guardians.

Coming out does not make us less part of the human community, just allows us to take part in it honestly. 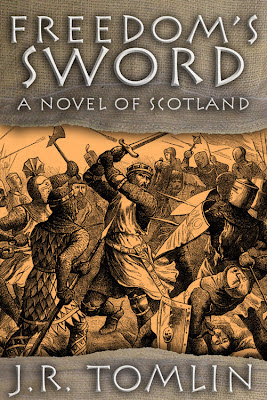 I am thrilled to say that Freedom's Sword, a Historical Novel of Scotland has excellent reviews on Amazon with twelve 5-star and fourteen 4-star reviews. Because it is the opening novel in my Scottish historical series, I am offering it to readers free on Amazon US, Nook Books, and iTunes.

The other books in the series now available are:

A Kingdom's Cost
and
Countenance of War

Not for Glory is planned for released in January.
Posted by J. R. Tomlin at 10:03 AM No comments: