Please contact Amazon and ask that they put in subcategories under Historical Fiction. At the moment, Historical Fiction is a huge dumping ground where everything from prehistory to Regency romances and WWII adventures can be found. This means that readers have trouble finding what they want to read.

It is no secret that Historical Fiction readers can be incredibly picky. I plead guilty here. I don't read Tudor fiction. I don't read Historical Romance. I DO read medieval fiction, but mainly medieval war fiction. Well, they're not going to break it down that close, but how about they give us a STARTING point instead of dumping everything together.

Amazon doesn't make it obvious how to give this kind of feedback. I admit that. But it's not hard once you know how.

The second question is "Tell us more about your issue". You get a drop-down menu and choose, "More non-order questions"on that. Then you get another drop-down menu where you can choose: "Give Amazon Feedback" and "Opportunities for improvement".

Then you FINALLY get the chance to type in something like: The Historical Fiction category needs subcategories. It is too hard now to find the kind I like to read. Barnes & Noble has subcategories. Why not Amazon?

I wish they made it a little more straightforward but it's only a couple of choices and when I did this, Amazon did respond. I think the problem is that we've been far to quiet on this issue. Amazon just added a lot of subcategories in Fantasy and Science Fiction. I believe they will in Historical Fiction as well IF readers tell them they want this.

Yes, it will also help me as an author since it will make my novels easier to find. But as a reader, I am tired of Amazon making novels harder to find than they need to be!

New Cover for A Kingdom's Cost

This isn't up on Amazon or B&N yet, but will be within the next day or two. I'm very pleased with the illustration from artist Mark Churms and the cover design from J. T. Lindroos. 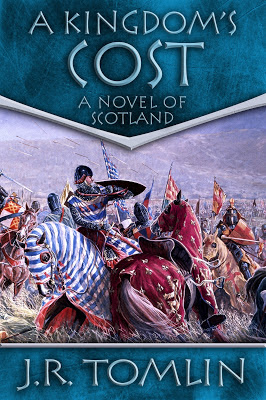 When I had the original cover done, I used black and white royalty-free art to keep the cost down, but I came to feel the original cover didn't do the novel justice. So I hope other people like this cover as well as I do.
Posted by J. R. Tomlin at 11:11 AM 6 comments:

That is the working title of my next historical novel. Which would be my next was a TOUGH decision to make.

There are a number of novels I want to write. I want to write about Second War of Independence and the part that Archibald the Grim, the third earl of Douglas, and William Douglas, the Knight of Liddesdale, played through deeds both brave and horrific. But the research was taking much longer than I expected and some of the material I needed was difficult to access.

So... the novel I plan on Thomas Muir, one of the Martyrs of Scotland, is a multi-year project involving as it does research on the events of 18th century Scotland, Australia, California, Cuba, Spain and France. And I am not ready to even consider tackling the Great Montrose. So that left (drum roll)

James I of Scotland who had at the very least a fascinating life. After his older brother, the heir to the throne of Scotland, was murdered by their uncle, the extraordinarily weak Scottish King Robert III sent his remaining son, then twelve years old, to France to join the French court for safety and to receive an education suitable to a king. Unfortunately, word had been slipped to the English who captured his ship on the way. He was taken to imprisonment in the Tower of London. His father died of grief when he heard the horrible news.

James's uncle, now in possession of James's kingdom, was in no hurry to act to free him from English captivity, if the English would have freed him which is doubtful. So imprisoned in England James remained. Of course, he was treated like a royal captive, educated to become a poet and athlete, and at times even a part of the English court (with guards at his back). How he survived eighteen years of captivity to return to his homeland along with the English noblewoman he had grown to love, to rule Scotland, to take his vengeance upon those who had despoiled his kingdom while he was gone, and unite a severely divided land while fighting the traitors who threatened his rule...

Not a bad story or so it seems to me. So that's what I'm writing. About a king first caged and then uncaged.

Hopefully, it will be out before Christmas.
Posted by J. R. Tomlin at 6:15 PM No comments:

I don't blog a lot about the inner workings of publishing because who wants to read about that? But this topic needs to be blogged about, talked about, and even taken to court -- which is happening now.

The Penguin-owned (yes, the huge and previously respected Penguin Publishing) Author Solutions, one of the scummiest, rip off, vanity publishing companies in the US, is now going world-wide under PENGUIN guidance, so as to rip off even more authors.

If you are new to self-publishing and thinking of joining in that crowded field, do NOT, I beg you, go to Author Solutions or any of the companies they own such as  Trafford, AuthorHouse, Xlibris, or iUniverse. They are all nothing but vanity presses, all owned by Author Solutions.

I have a lot to say about that, but fortunately for me a writer I highly respect, David Gaughran, has already said it on his blog, so I am going to ask you to go there and read his blog that discusses this rip-off and how Publisher's Weekly, the NYT and others are giving them a pass (because Penguin has big advertising dollars).

Take it away, David: The Author Exploitation Business

All I can add to David's comments is, "Ditto!"