A New Novel from Caddy Rowland: House of Pleasure

My good friend Caddy Rowland has a new novel out today, and it looks marvelous. I haven't read it yet since it's just out but her Gastien series was fantastic so I feel safe recommending that you check out House of Pleasure. 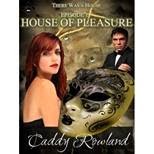 Episode 1 of There Was a House saga, a continuing story of revenge and redemption.Fueled by rage and disgust, Phoenix runs away from home. The situation there had become unbearable. In fact, things couldn't get any worse.But they do. Betrayed in New York by a boy who she thought was a new friend, she finds herself taken prisoner by a low-class pimp. Then, when she thinks she's on her way to her first seedy trick, Phoenix winds up locked in a limo with no way out. She wakes up in an illegal brothel in New Orleans. Phoenix vows she will find a way to destroy Antoine, the owner of the brothel. Instead of being Antoine's prostitute, she'll become his lover, his confidante, and pretty soon, his manager. And then, when he least suspects it, she'll bring the entire house down.She better be damn good.

There will only be one chance.

I'm a huge Runrig fan, so I thought I'd share one of my favorites and the English translation. Please enjoy the music of this iconic group:


Here hangs an open landscapeA wild and huge frontierFrom a harsh and a barren wastelandThrough the grave to the promised fieldYou came, you trapped, you chartedYou laid the railraods and the schemesAnd you tamed this land by enterpriseAnd by the power of your dreamsFrom the olden coasts of IrelandFrom the Hebridean shoresWith the forgotten chosen onesRunning from Europe in drovesThere's a town in ManitobaThey say the windows touch the skyBut across the brine the shipyards closeIn this garden flowers dieStill the homelands divide usLike your blood red brothers of the plainsBut where they grieve a candle still burnsA prayer from a flicker to a flameBut you made this Clan greatAnd you made this nation bloomAnd you roseWith your people through the new worldLike a rocket to the moon
Posted by J. R. Tomlin at 6:23 PM No comments: