For those who have been waiting for it, here is the opening, still unedited, of the sequel to A King Ensnared:

On each side of the path to the high peaked doors of Westminster Abbey, a line of priests stood, swinging censors. They intoned the Venite as the solemn train approached. Wisps of smoky incense were whipped away by the sharp November wind.

The voices of the choir seemed to surge through the open west doors. James clasped his hands behind his back as he paced behind knot of nobles who surrounded the queen as they followed the chariot baring the coffin. King Henry’s long funeral cortege, from Vincennes to Rouen, by sea to Dover and at last to Westminster Abbey in London was finally, after months, coming to an end. He allowed a silent breath of relief to escape his lips. Behind him, Henry Percy, Earl of Northumberland, was muttering that this could finally be over, and at James's side, his vigilant keeper, Sir William Meryng,  gave a sudden shiver when the wind whipped their cloaks.

Harness rattled and hooves clanked on the stone as massive horses heaved, pulling the heavy cortege bearing the coffin to the high peaked doors of the abbey. Wheels grated with a nerve shivering sound beneath the swell of solemn music. Even in November’s watery sunlight, the silver-gilt effigy atop the coffin shimmered. James craned to glance above. Brilliant ruby and sapphire glass filled the huge windows. The statues of saints set in their niches frowned down upon the long train of nobles who followed the coffin.

Queen Catherine moved rigidly amidst the English royalty, draped in white mourning. The tension between her and the men who would now rule her and the infant king flowed as strongly as the hymns. For a moment, her step faltered and she sagged as she reached the high arched doorway. Joan de Beaufort at her side, also in solemn white mourning garb as well, reached a hand to her elbow. The Duke of Gloucester murmured something to the Queen that James could not make out. A tremble seemed to shake her, but she nodded to her good-brother, and they followed the chariot through the towering doors into the cool darkness of the nave.

The scent of beeswax and incense wrapped him as James followed them in. At least they would be out of the wind though the funeral mass would be long and weary.  When someone barked a complaint when his foot trod on, James turned his head to see Drummond squeezing his way through the press. James raised an eyebrow at his secretary, who he'd not known had returned from his task in Scotland.

Drummond bowed respectfully when he was close, but his eyes darted toward Meryng. "Your Grace," he said in a low voice so as not to disturb the solemnity of the rising chords of the choir. Surrounded by all the bishops of the realm of England, thin and frail Archbishop of Canterbury, Henry Chichele, began to intone the requiem mass.

"How went your journey?" James asked in an undertone.

"Sire. I knew you would want your letters as soon as I returned." He drew in a breath. "Especially one from one of your close kin, so I decide not to await your return to your chambers--"

James stilled at the surprise of the words. After a long pause, thinking which of his kin might finally decide he was worth their correspondence, he nodded. "You have it on your person?"

At Drummond's quick nod, James moved toward one of the huge columns. In the press of a thousand nobles, it was impossible to have privacy but at least he was out of sight of the alter. "You saw Bishop Wardlaw and the Bishop of Glasgow? Delivered the letters?"

"Aye, Thomas Myrton returned with me for your service at their command, especially to keep in close contact with him and with Bishop Wardlaw."

James held out his hand and Drummond slipped a parchment to him. After glancing quickly around to see that no one was taking note of their quiet conversation, James raised his eyebrows at the seal of the earl of Atholl. Close kin indeed, his half-uncle and full brother to that other murderous uncle, the Duke of Albany, who now moldered in a grave.

Holding it close, James slid his thumb under the seal and turned to the column to discretely read it and jerked in a sharp breath at the words. His uncle would throw his influence behind forcing Murdoch Stewart, now regent of Scotland, into agreeing to negotiations for James's release from captivity. He folded the letter and slipped it into his sleeve. Leaning a shoulder against the thick marble column, he narrowed his eyes and stared through at a through the wall as though to see that faraway uncle. Atholl… the youngest of the brothers. Atholl had sat by while his older brother committed foul murder and then his nephew allowed Scotland to descend into lawless chaos. But he still was not an ally to be scorned.

Meryng cleared his throat. "Is all well, Lord James?"

James gave the knight a bland smile. "Nae, Sir William. Merely greeting my good secretary after his long journey to and frae Scotland."

When Meryng again turned his face to the high altar, Drummond leaned close. "Myrton carries letters to the English asking safe-conduct for Bishop Lauder as well as John Forrester and the Earl of March to come to Pontefract to negotiate terms of your release."

James peered around the column toward the high altar where Joan stood next to the Queen. As the Archbishop began another prayer, Joan looked toward James and their gazes locked. James allowed a smile to touch his lips. He gave a quick nod. She lowered her eyes but she had seen it.


Oh, James would have a word to say about the negotiations. Beaufort could be won to his cause, and his freedom guaranteed. For James had not yet played his best card.
Posted by J. R. Tomlin at 4:19 PM 1 comment:

A King Ensnared Price Reduced for One Week 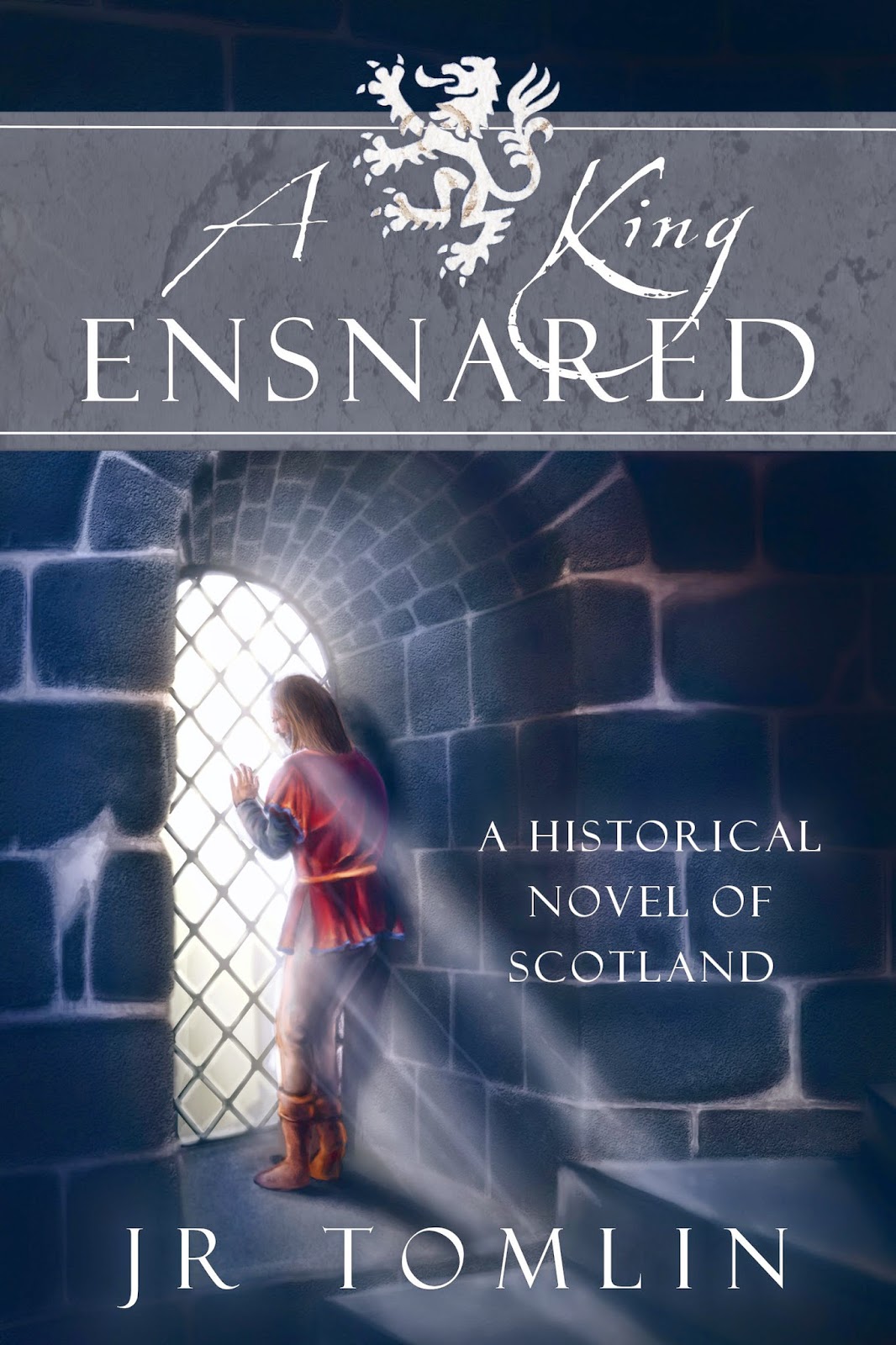 99 Cents for one week only on Amazon!


My apologies to those in the UK or elsewhere. I am looking into extending this to other countries but at the moment it is US only.
Posted by J. R. Tomlin at 1:56 PM No comments:

Always, Always back up your work!

I preach this constantly and then fall down on it myself.

I decided to switch from the online backup service I had previously used to another one but (surprise, surprise, Ms. Procrastination) hadn't gotten around to actually starting the new service. A few days ago I had also backed up to a thumb drive but hadn't done it for the end of the novel I was working on.

So guess whose work computer is having a major failure today, actually found it yesterday. I suspect I sound calmer than I am but I *think* it is a power supply failure not a hard drive failure. I won't know for sure until the repair guy gets here. If I'm right, then my work should still be there. At worst, I only lose a few days work BUT my novel was finished and was supposed to go to the editor today. Because of this, she has to schedule other work and it will have to be pushed back. If there is a large delay I may have to consider finding another editor and having the scheduled editor do my next novel.

OMG! I am so screwed! And this is MY OWN FAULT! *runs around the room screaming*

So it looks like there will be at least a week or two delay in publishing A King Unchained, the sequel to A King Ensnared, but it will not be a lengthy one. I still have all except the last couple of chapters safely on a drive and I am right this second backing THAT up! Double!

Playing on my iPod

I've been lazy about posting whilst I'm writing my next novel, so I thought I'd just share what is playing on my iPod.

The rank stench of those bodies haunts me still

There are plans in the UK for celebrating the beginning of Word War I this autumn, a war in which there were more than 16 million deaths and 20 million wounded. It is an odd thing to celebrate, to put it mildly, but I thought I would join in, if a bit early, with a poem by a man who was there. Here are the thoughts of poet Siegfried Sassoon who fought that war in the Royal Welsh Fusiliers.

The rank stench of those bodies haunts me stillAnd I remember things I'd best forget.For now we've marched to a green, trenchless landTwelve miles from battering guns: along the grassBrown lines of tents are hives for snoring men;Wide, radiant water sways the floating skyBelow dark, shivering trees. And living-cleanComes back with thoughts of home and hours of sleep.To-night I smell the battle; miles awayGun-thunder leaps and thuds along the ridge;The spouting shells dig pits in fields of death,And wounded men, are moaning in the woods.If any friend be there whom I have loved,God speed him safe to England with a gash.It's sundown in the camp; some youngster laughs,Lifting his mug and drinking health to allWho come unscathed from that unpitying waste:(Terror and ruin lurk behind his gaze.)Another sits with tranquil, musing face,Puffing his pipe and dreaming of the girlWhose last scrawled letter lies upon his knee.The sunlight falls, low-ruddy from the west,Upon their heads. Last week they might have diedAnd now they stretch their limbs in tired content.One says 'The bloody Boche has got the knock;'And soon they'll crumple up and chuck their games.We've got the beggars on the run at last!'Then I remembered someone that I'd seenDead in a squalid, miserable ditch,Heedless of toiling feet that trod him down.He was a Prussian with a decent face,Young, fresh, and pleasant, so I dare to say.No doubt he loathed the war and longed for peace,And cursed our souls because we'd killed his friends.One night he yawned along a haIf-dug trenchMidnight; and then the British guns beganWith heavy shrapnel bursting low, and 'hows'Whistling to cut the wire with blinding din.He didn't move; the digging still went on;Men stooped and shovelled; someone gave a grunt,And moaned and died with agony in the sludge.Then the long hiss of shells lifted and stopped.He stared into the gloom; a rocket curved,And rifles rattled angrily on the leftDown by the wood, and there was noise of bombs.Then the damned English loomed in scrambling hasteOut of the dark and struggled through the wire,And there were shouts and curses; someone screamedAnd men began to blunder down the trenchWithout their rifles. It was time to go:He grabbed his coat; stood up, gulping some bread;Then clutched his head and fell.I found him thereIn the gray morning when the place was held.His face was in the mud; one arm flung outAs when he crumpled up; his sturdy legsWere bent beneath his trunk; heels to the skye.

I'll leave you to draw your own conclusions.
Posted by J. R. Tomlin at 3:41 PM 2 comments: