Cover Art for my upcoming novel: A King Uncaged 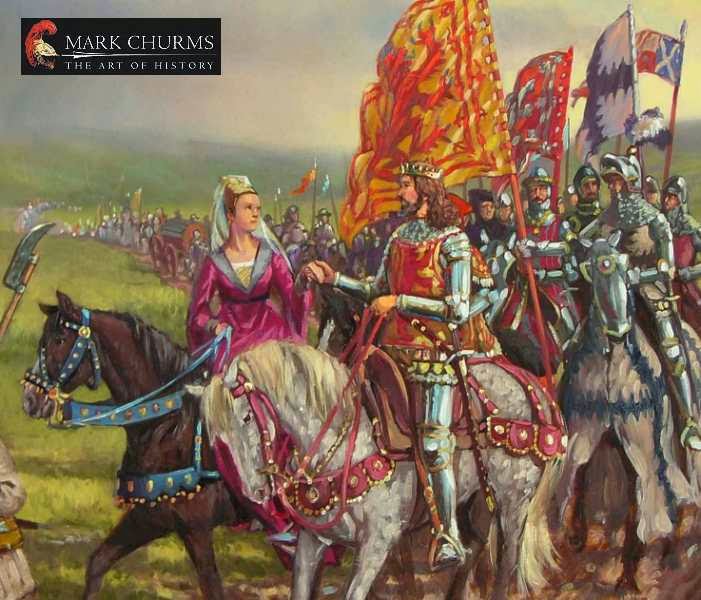 By artist Mark Churms
Posted by J. R. Tomlin at 6:58 AM No comments:

Snippet from my upcoming sequel to A King Ensnared

Totally unedited at this point so be kind. :)


Joan smoothed the skirt of her gown, the comeliest she had ever owned. Everything she wore was new. Her smock was of fine linen, the under-gown of the finest wool to protect against February's chill. Of a deep sapphire blue as her mother had insisted, it was snug to her hips and then flared to the ground. The outer surcoat, a paler blue, was samite with shimmering gold thread running through; its deep V-neck showed the darker gown beneath.

Queen Catherine was officially helping her to dress, but seemed to look through them as though they weren't there. She turned and wandered to the window. Joan's mother pulled a comb through her hair one last time more and smoothed it down her back to her waist. She made a little smacking sound with her lips and said, "Soon I may never see you again, daughter."

Joan turned and pressed a quick kiss to her mother's cheek, but she had no idea what to say.

"I have no right to be sad." Her mother shook her head and smiled although it looked a bit false. "How many mothers have their daughters with them so long?"

"They tried to convince me to marry enough times. Now I think my uncle may now be glad of my being such the stubborn girl he always called me."

Her mother shook out her veil, silk so fine it seemed no more than a wisp. "Henry was too fond to force you." Her marriage had been fiercely argued since she was fourteen and her betrothed died.  Then Joan swore they'd have to drag her screaming to the altar. She'd thought a few times that Henry might do so, but he'd given way to her entreaties. Joan lowered her head so the veil could be settled over her hair and a narrow gold circlet put on her brow to hold it in place. Her mother kissed her forehead. "Beautiful daughter. They'll love you, but--" her voice broke. "Sending to live with the wild Scots. It is a hard thing."

Leaving behind the civilized ways of the English was frightening enough that when she allowed herself to consider it, her heart beat like mad, but James would be with her. All would be well. She was sure of it.  She held her mother's hand and turned to look into the mirror that her little sister, Margaret, was holding up for her, eyes wide. "You look so elegant, Joan. I hope I look so when I wed."

"You will, Meg." In the mirror, her mouth curved into a smile. Meg was right that she looked elegant. She squeezed her mother's hand. "All will be well. I promise."

She hardly felt the stairs under her feet as she hurried down to the bailey yard. Her father should have been the one to lead her mount to the church but he was long dead and her two elder brothers prisoners in France, so it was her youngest brother Edmund, a rangy boy of eighteen still with a few spots on his sullen face, who lifted her by the waist and seated her in the saddle. The cream-colored mare was a wedding gift from her uncle. It was a beauty and she touched its mane that was braided with sprigs of lily, bishop's lace, and roses

"Ready?" Edmund scowled up at her.

She touched his shoulder. "Don't be so angry." She couldn't help that it had been the Scots who had captured their brothers in France. It seemed unfair for him to blame James, and they had little time left to make peace. "Can't you be happy for me?"

"Are you? Happy?" he said as he took the bridle and led the way through the gate and onto the street.

"I am." She smiled up at the watery February sunlight. The throng that lined the London Bridge was cheering as the mare pranced daintily across. Banners flapped overhead, held up by the men-at-arms, marching in a line on each side of the party; the Queen, her mother and other guests followed. The veil gave made the world look hazy and dream-like.

Beneath the massive square bell tower, the grounds of the Church of St. Mary Overie was bustling with the people of London, happy to cheer for a royal wedding, even that of a Scot.  James stood before the arched doors, shining like a Roman god in his cloth-of-gold doublet beneath a cloak of crimson velvet blazoned with the Lion Rampant of Scotland. Beside him stood her uncle, Henry Beaumont, the bishop. A rushing strange sound in her ears pulsed in a strange counterpoint to the shouts.

His face solemn, James strode forward to meet her as Edmund lifted her down from the saddle. He took her hand to lead her to lead her to the doors where they would be wed, in the open as was custom so the crowd could witness their joining. Everything seemed even hazier and time heaved oddly along while her stomach fluttered as though filled with riotous butterflies. The buzz in her head confused the words of the ceremony.

She could barely follow what James said in a response to her uncle but then it was her turn. She took a deep, calming breath. She swallowed hard and managed to keep her voice even to say, "I, Joan de Beaufort, take thee, James Stewart, to my wedded husband, to have and to hold from this day forward, for better, for worse, for richer, for poorer, in sickness and in health, till death us depart: according to Gods holy ordinance: And thereto I pledge thee my troth."

The bishop took the ring and said a quick prayer over the gold band with its square emerald.  James retrieved it from him and lifted her left hand. Her head spun and she sucked in a breath. She would not faint at her wedding and have her new husband think her a weak goose.

"With this ring I thee wed: This gold and silver I thee give: with my body I thee worship: and withal my worldly goods I thee endow." He slipped the ring in turn a little way onto each finger saying in turn, "In the name of the Father, the Son, and the Holy Spirit." With the last phrase, he slid it onto her ring finger.

Cheers and whistles nearly drowned out her uncles closing blessing.  People surged forward and a fresh-faced acolyte held up an alms bowl. James slipped his arm around her waist and she welcomed the support as she scooped up a handful of silver pennies. She suddenly felt giddy and a laugh bubbled up. She flung the coins to scatter them into the crowd. They shouted her name and scrambled for the coins. James flung a handful high over the heads of the mob. She grabbed more and tossed them until the bowl was empty. She smiled up at James and through the mist of her veil she saw him look down at her, his large, piercing blue eyes shining.

She couldn't help softly laughing when James led her into the church.

As quickly as the wedding had passed, the Mass dragged as though time had slowed to a crawl. In the cool darkness of the church, she breathed in the pleasant scent of beeswax candles and frankincense as she tried not to twitch with impatience. Her uncle droned on through the service but her mind wandered to the banquet that awaited them. Was the food sufficiently elegant? Her mother had assured her it was. Had they planned enough minstrels and tumblers? Later, for the first time since France, she and James would at last be alone and the thought made her heart race like a galloping steed. The bedding revels were less to her taste. Poor Queen Catherine had been near tears at the shouts and rude instructions when Henry's companions tossed him into bed with her. Still, it must be borne for what came after.


At one point, her uncle read from the scripture of Ruth: "Do not be against me, as if I would abandon you and go away; for wherever you will go, I will go, and where you will stay, I will stay. Your people are my people…" It jerked Joan's mind back to the present. Ruth had gone to an alien land. Joan was no Bible scholar but that she remembered that much. Ruth had taken strangers as her people.

Suddenly, she felt cold at the thought of a life amongst people she didn't know who might hate her. James must have felt her tremble for he pressed her fingers. She took a deep breath. James's people would be hers. They wouldn't hate her because she was English. James wouldn't let them.

A King Ensnared Nominated for Best of the Independent eBook Awards

I am thrilled to be able to announce that A King Ensnared has been nominated for Best Historical Fiction for 2014 in the eFestival of Words Best of the Independent eBook Awards. These are peer nominations made by fellow authors as well as publishers, editors, and book reviewers. I am thrilled to have one of my novels on the 'long list' of seven novels. The nominations will be trimmed to a 'short list' and winners announced at the eFestival of Words later this year. 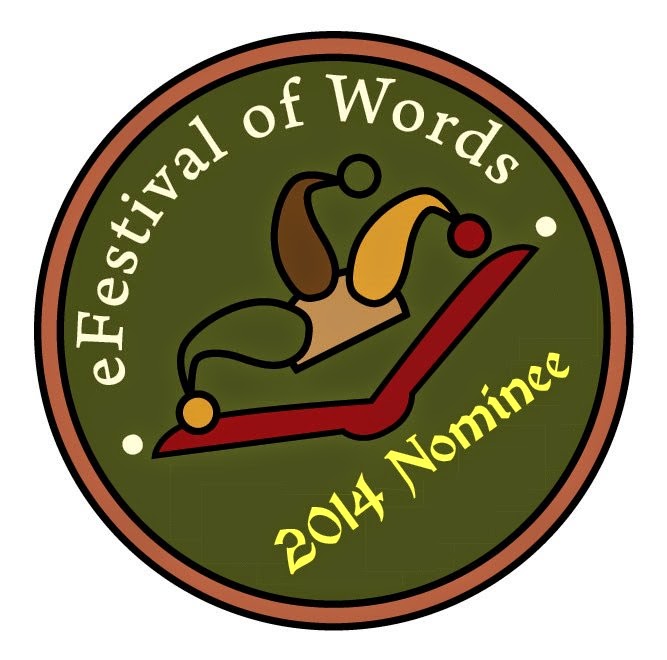 Here are a number other novels nominated in various categories. If you'd like to check out some of the these excellent novels nominated here is a link to the list: eFestival of Words Nominations
Posted by J. R. Tomlin at 10:27 PM 3 comments: