Thomas Muir and the Struggle for Liberty

On the 250th anniversary of his birth.

Thomas Muir was a fighter for liberty in the bravest of ways, using only his brilliance and eloquence rather than sword or gun.

A founder of the Scottish Association of the Friends of the People, Thomas Muir and his fellow members, including not just fellow Advocates but also weavers, tailors, cobblers, brewers, bakers, tanners, butchers and hairdressers, began a struggle for Parliamentary reform because of oppressive laws such as  the Corn laws and the Enclosures. As the French Revolution raged, the people of Britain watched, desperate for relief from oppression, and the government watched with a growing conviction that all opposition, even the most peaceful, must be quashed by the harshest possible measures.

Spoken at the first convention of the Scottish Association of the Friends of the People, these are the words about Scotland that soon led to Muir's downfall:

We do not, we cannot, consider ourselves as mowed and melted down into another country. Have we not distinct Courts, Judges, Juries, Laws, etc.?

Even before the end of that convention, there were murmurs of sedition from certain Unionists. Worse, the convention had been penetrated by a government spy. Whilst Muir went about his business preparing his brief as defense counsel for James Tytler who had been arrested on a charge of sedition, the government was preparing to arrest Muir on the same charge. And he was indeed arrested on his way to Tytler's trial. Released on bail, he realized that desperate action was required and he made a last ditch effort to convince the French not to execute King Louis which would cause horror in England, and action against supporters of reform was sure to follow. It was too late in spite of his warm welcome in France. The king was executed. 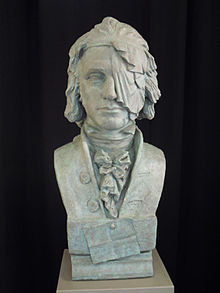 War between Britain and France broke out. Seeing their chance, the government  advanced the date of Muir's trial from April to 11 February. With the new war, Muir knew it was impossible to reach Edinburgh in time so he wrote stating he would return as soon as the difficulties of travel permitted.

The British government did not care and immediately declared Muir an outlaw. When after some months of a roundabout route back to Scotland, he set foot on his homeland he was arrested and dragged to Edinburgh for a showcase trial before a handpicked jury of anti-reformers. The trial has come down in history as a classic example of judicial abuse--nothing but a kangaroo court.

Muir's sentence of 14 years transportation to Botany Bay was unprecedented. However, his fiery rhetoric built his reputation as the preeminent of the Scottish Martyrs.

I have devoted myself to the cause of The People. It is a good cause—it shall ultimately prevail—it shall finally triumph.

Thomas Muir was transported with others of the Scottish Martyrs to horrendous conditions of Botany Bay. But that was only the beginning of his amazing adventure.

Just because he's so cute, my 3 month old Westie pup MacFluff who has fallen over from exhaustion after play time. 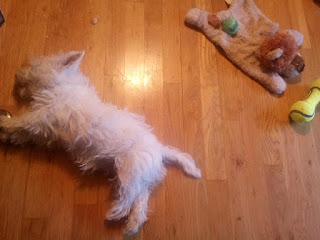 The Templar's Cross now on Amazon! 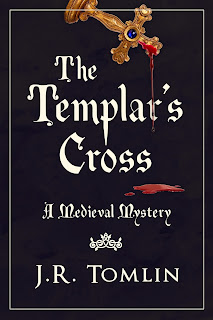 Sir Law Kintour has returned from the war in France crippled, broke, and in need of a patron. In desperation, he reluctantly accepts a commission to find a nobleman's runaway wife. He enlists the help of a fellow Scot with whom he escaped after their defeat at the Battle of Verneuil. But his friend is murdered, and Law discovers he has been lied to. As the murders continue to mount, powerful interests come into play. When the Sheriff of Perth considers him a convenient scapegoat, it gives Law no choice but to untangle the lies and find the killer or hang for the murders.