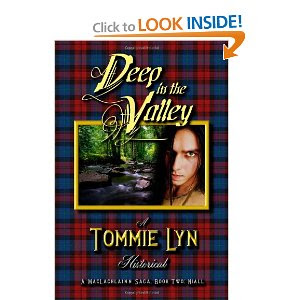 This historical novel touches what is sometimes called the forgotten ethnic group of the US: Scottish Americans. There are, in fact, as many people of Scottish descent in the US as there are in Scotland. Many of them know little about their heritage or how our people came to be here.

Tommie Lyn delves deeply into this history in her historical series, The MacLachlainn Saga, that began with High on a Mountain and the story of Scotsman Ailann MacLachlainn's loss of his family and Scottish homeland as he was exiled, a slave, to the American colonies.

As Deep in the Valley begins, Ailann has regained his freedom and begun a new family in the land of the Cherokees with whom he has become a friend and ally. He has married a Cherokee woman, Mali. They have children, a farm and what Ailann is convinced should be a good life. But his second son, young Niall, is too much like his father, restless and rebellious, but so is the older brother with whom he has a long-standing rivalry for their father's affections. This is a rivalry that Niall always loses.

The characters are interesting and the setting beautifully drawn. You can easily relate to Ms. Lynn's obvious love for the heritages she writes about, both the Scottish and the Cherokee. Although much of this novel is what I would term domestic, it is none the less engaging and held my interest. However, as the American colonies rebel against British domination and begin their fight for independence, the plot changes somewhat, becoming a bit more of an adventure.  The mix of domestic and adventure should give something to people who prefer either in a historical novel.

I did, however, have a problem with the very frequent changes in point of view and the large number of point of view characters. I would just get interested in one character when she would change. That kept me from becoming as interested in or connected to the main character as I wanted to be. The story is presented as Niall's but I never felt particularly attached to him. This was a shame because it was a very interesting story and he could have been a much more interesting character if he had made up more of the story itself.

However, while I thought Deep in the Valley could have been improved, it is still a very enjoyable novel about a part of US history and the history of the Scots that is all too often ignored. Scottish history and the history of the Scots in the US is much more than shortbread and tartan tat. The depth of love for their homeland, for each other, and for their new country is beautifully portrayed in this novel and I recommend it both to Scots and to historical fiction fans.