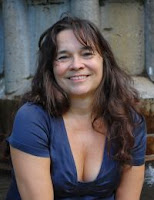 I'd like to welcome fantasy author Ruth Nestwolf, author of the novel Yseult: A Tale of Love in the Age of King Arthur.
Ruth, when did you start writing? What did you first write?
Sometime in grade school. The first thing I wrote were animal stories, what I liked to read at the time. I started my first historical novel (set in ancient Crete) in seventh grade. In high school, I actually sent a couple of stories out to short story markets. But then rationality took over, and instead of writing I studied literature, had a couple of kids, got a Ph.D., taught at the university for a while. Much of that time I was writing on the side, but it wasn't until after I attended the Clarion West Writing Workshop that I began writing regularly and actually started to have any success.


Tell us about the fantasy world(s) you make up. What are they like?
I write a lot of different things spanning the genres of fantasy and science fiction, but my novels are mostly in the genre of historical fantasy. They tend to be set in a recognizable historical period, but with distinct magical elements added. Take Yseult, for example -- admittedly the only one I've published until now. *g* It's a retelling of the famous love story of Tristan and Isolde, set in fifth century Ireland and Britain, and the overarching plot revolves around the battles of King Arthur against the Saxons and other enemies of Britain. I did a lot or research, and I think it has a very historic feel to it -- but at the same time, a number of the protagonists are wielders of magic. I like fantasy worlds that have a gritty, realistic feel to them but are still recognizably different, and so those are the kinds of worlds I try to create.


How do you work out a magic system for your world? Do you prefer a lot of magic? Light magic? And why?
For Yseult, I started with the pseudo-historical setting I was using and tried to figure out what kind of magic would fit into that world. Looking at Druid magic and Irish myth and superstition, I based my magic on various ideas of "second sight" but made it much more powerful. I don't like magic that can solve all problems, though, so the magical powers in Yseult are limited to seeing into the future and the minds of others, sending thoughts and dreams to another person over a long distance, and manipulating people's perceptions (the power of knowing, the power of calling, and the power of changing). It's important to me to have very distinct limits to the magic in my world; it keeps things from being too easy for my protagonists. When magic is too strong in fantasy or its price isn't high enough, problems can be solved much too easily and tension disappears.


What is the hardest thing about making up a fantasy world?
Getting the rules right and making the world consistent.


Tell us about your most recent main character. Would we want to share a meal with them? Why?
I'm trying to figure out who my most recent main character is. *g* At any given time, I have multiple projects in various stages of completion. Right now I'm editing a follow-up novel to Yseult, Shadow of Stone, but in order to concentrate on that, I shoved another novel to the back burner. I also recently completed a steampunk short story set in my own backyard, the Daimler-Motorenwerke in Stuttgart-Bad Cannstatt in the 19th century.
But when it comes right down to it, the protagonists in all those fictions are difficult and pleasant in their own ways. Whether you would want to share a meal with them would largely have to do with whether you shared their quirks and obsessions.


What about the villain of your most recent novel. How did you make them up? Would we be scared to meet them in a dark alley?
My villains tend to be people who function quite well in their society, so they probably would not be particularly fearsome in a dark alley -- unless you knew them well already and knew what they were capable of. The main antagonist in Yseult is an ambitious king whose sense of morality mostly revolves around his own advantage and getting back at those who have gotten in the way of what he wanted. In the follow-up novel, Shadow of Stone, the antagonist is a kind of "poor relation" who resents how badly life has treated him and is determined to turn things around so that he can achieve the status he thinks he deserves. What both of them have in common is a talent for manipulation and an inability to empathize with the problems of others. Their fixation on themselves borders on the psychopathic, but at the same time, they are completely normal members of society.
I guess I make up the kinds of villains I do because I believe evil tends to stem from selfishness and lack of empathy. It might not look evil on the surface, but someone who is concerned with his or her own advantage above all others, given enough resentment and/or opportunity, is quite capable of committing atrocious acts in the name of what they think is justice. Several books I've read on criminal psychology have been very helpful in creating my antagonists.

What is your next project?
The present work in progress, Fragments of Legend, is something new for me, since it jumps between different levels in time and reality. In the modern level of the story, an American book conservator in Germany discovers evidence in the backing of an old herbal that could mean that the most famous epic of medieval German literature, the Nibelungenlied, had been written by a woman. The story of her attempts to uncover the truth in the fragments she found unfolds parallel to the medieval narrative of the woman brave enough to defy convention and write her own version of the Nibelung legend, as well as the half-mythic, half-historical tale of Brynhilda, Sigfrid and the downfall of the Germanic tribe of the Nibelungs.


Ruth Nestvold's fantasy novel Yseult: A Tale of Love in the Age of King Arthur is available on Amazon for only $4.95. You can also find her Dragon Time and Other Stories and Looking Through Lace on Amazon.

Good interview. Very thoughtful. It's always nice to see someone put that much thought into their fantasy work.