Review of The Forever Queen by Helen Hollick 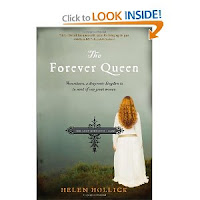 I really enjoyed this novel by Helen Hollick but I had some big reservations about it, too. I suppose you might say I have a bit of a difficult relationship with The Forever Queen.

The title character of this is Emma, Queen of England, daughter of Richard I, Duke of Normandy. At 13, Emma was shipped off to England to marry the inept Æthelred the Unready of England. England was being heavily raided by the Vikings and life was a lot less than easy or safe. Add to that her smarmy husband, her inability to speak the language and her youth and you can see why she had quite a struggle. It was very easy to come to sympathise with the young girl as she struggled to cope with a difficult life.

However, when her unpleasant husband Æthelred, dies, she marries King Cnut the Great of Denmark, now also King of England. In my opinion, King Cnut is not nearly written about enough. He was without doubt the best king to ever rule England and a fascinating man. After a life of struggle and relative unhappiness, Queen Emma finally finds love, although not always an easy life, with her new husband.

The Forever Queen is full of family life, jealousy, Vikings raids, battles, and treacherous noblemen. All that keeps it an interesting read. However, there is a down side to the novel. It is also full of an overwhelming amount of detail, much of which is not needed for the story development. I understand what a balancing act it is to give enough detail to help a reader picture an unfamiliar time and not bog down a story, but I am sorry to say, I don't think Helen Hollick achieved that balance. A good trimming of unnecessary detail would have served this novel well. Oddly enough, with all the historical detail, I didn't feel that the characters were fleshed out as well as they could have been. Although I came to really feel for Emma (and disliked the direction the author went with her character at the end), many of the other characters seemed to be rather thin and some came and went rather without any explanation.

At the end, I do recommend this novel. There is not nearly enough written about the 11th century and King Cnut is more than worth being written about. However, don't expect either a happy ever after ending or an easy read. I can't say this is a perfect novel by any means, but it is very much worth reading. It should be on any historical fiction lovers list of novels to pick up.

You will find The Forever Queen by Helen Hollick on Amazon.
Posted by J. R. Tomlin at 11:41 AM

I sent you an email Jeanne, is it in your spam filter?

Thanks for letting me know.

My knowledge of King Cnut is very minimal Jeanne. Perhaps before I order this at the library I'd better brush up.

Thanks for the candid review.

*laugh* you thought this edition was too long - you should have seen the original - A Hollow Crown. Forever Queen has been cut by 40,000 words.
I wrote A Hollow Crown for the English market ten years ago when stomping great tomes were expected for historical fiction, and I wrote what my publisher (Heinemann) wanted. Forever Queen, edited down, is much better than the unedited Hollow Crown in my opinion.
FQ is not my favourite, I think Harold the King (entitled I am the Chosen King in the US) is by far the better book. (Although my historical adventure fantasy Sea Witch series is my favourite)
Incidentally I used as much factual information as I could about Emma - hence her character, especially in the latter chapters.
Her story finishes in "Harold".
Thanks for the review, honest opinions and constructive criticism is always welcome. I do urge you to try Harold/Chosen King though!

Oh, I wasn't questioning your facts at all, just felt that it could have been softened a bit. :-)