Teaser Tuesdays is a weekly book meme that I just today came across. It is hosted by MizB of Should Be Reading. Anyone can play along! All you have to do is:

-Grab your current read
-Open to a random page
-Share two (2) “teaser” sentences from somewhere on that page
-BE CAREFUL NOT TO INCLUDE SPOILERS! (make sure that what you share doesn’t give too much away! You don’t want to ruin the book for others!)
-Share the title & author, too, so that other TT participants can add the book to their TBR Lists if they like your teasers!

My teaser comes from Isabeau, A Novel of Queen Isabella and Sir Roger Mortimer by N. Gemini Sasson.

Isabeau is written from the point-of-view of a particularly fascinating woman, Queen Isabella, often referred to as The She-Wolf of France and from that of her lover, Roger Mortimer and of and events that had long-ranging effects in the Kingdom of England. This is from early in the novel, page 67 which happens to be where it fell open. Mortimer is about to be imprisoned in the Tower of London by an angry Edward II. 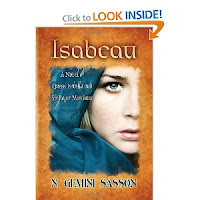 “You promised you would procure our pardons,” I said aside to Pembroke.

“He tried,” Edward said, his lips curving into a sardonic smile as he stepped before me tauntingly, “valiantly.
Posted by J. R. Tomlin at 3:33 PM

Great teaser! Glad you're participating in Teaser Tuesday! It's my favorite meme. I find so many books to add to Mount TBR.

Glad you liked the teaser. Teaser Tuesday is new to me, but I think it's a great idea. By the way, I will be doing a review of the novel as well. :)